The new (November 2017) report “Bioeconomy regions in Europe” has just been published by the Bio-based Industries Consortium and is available online (pdf).

Norway is represented by two regions: Møre and Romsdal, and Nordland.

Greece is represented by Thessaly and Macedonia.

Our paper “A Mixed Methods Approach Towards Mapping and Economic Valuation of the Divici-Pojejena Wetland Ecosystem Services in Romania” was just published on the Proceedings in System Dynamics and Innovation in Food Networks 2017. 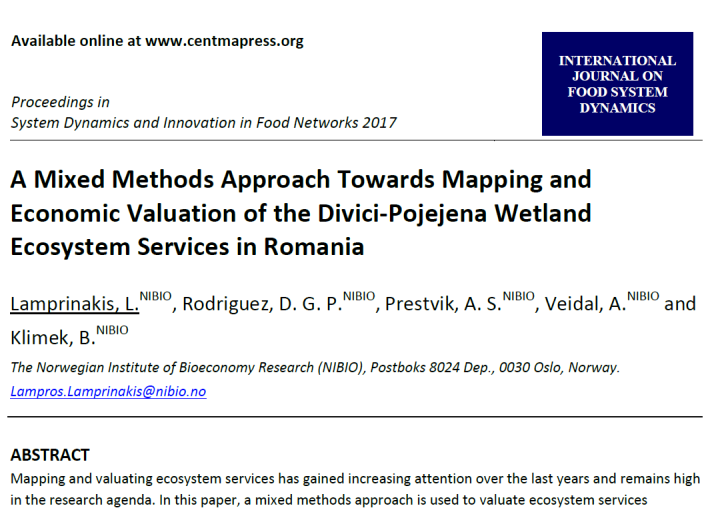 The paper can be directly accessed here (PDF).

Famous institutional economist Ha-Joon Chang and author of “Bad Samaritans: Rich Nations, Poor Policies, and the Threat to the Developing World” talks on the FT about development and the future of economics.

The Gapminder Foundation was founded back in 2005 by Ola Rosling, Anna Rosling Rönnlund and Hans Rosling in Stockholm as a “non-profit venture – a modern ‘museum’ on the Internet – promoting sustainable global development and achievement of the United Nations Millennium Development Goals.”

Its main project is Gapminder World – Wealth and Health of Nations that is based on an extensive UN database including over 430 indicators that cover unemployment, economic growth, natural disasters and many more. The example below illustrates Gapminder World with life expectancy and income (per capita) over the period 1950 to 2006 (latest version includes projection up to 2050).

The Dollar Street is another great feature. All people are assumed to live on this street where the poorest live to the left and the richest to the right (similar to a Hotteling linear version model). Selecting different parts of the street gives photo-panoramas from typical households at different income levels.

Don’t forget to check out Gapminder Labs for more.